NY TIMES MAGAZINE: Is This the Best Education Money Can Buy?

NY Times Magazine: Is This the Best Education Money Can Buy? (link)

Avenues recent visits to the Paint and Memory exhibit by English painter John A. Parks was a fun experience with the children  immediately responding to the finger paintings.  They also toured the map paintings of London, pointing to places they knew or recognized by name. 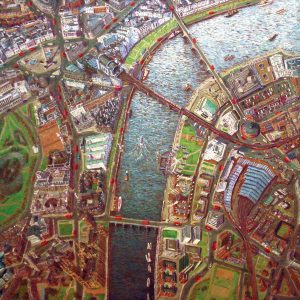 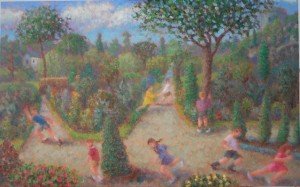 Recent Paintings by John A. Parks

In his recent pictures, executed as finger paintings, John Parks explores the memories of his English childhood in a series of richly evocative images. “In a sense I’m using a childish means to recreate a child’s world,” says the artist, “although the resulting paintings are far more sophisticated than those of a child.”  The lush surfaces, gloriously layered color and suggestive drawing work together to create a novel and intensely nostalgic vision. What is remembered are glimpses, sometimes idyllic and sometimes disturbing; cycling through a village on a summer’s day, playing hide-and-seek in a public park, the mayhem of an indoor swimming pool, the sudden formality of a Maypole dance. The limitation of painting with his fingers has forced Parks to simplify the descriptive tasks of the painting. “There is a certain indeterminacy with finger painting,” he says, “you are never exactly sure where an edge is going to go.  Chance events occur that you can edit out or leave in.  The process adds a richness and a very physical engagement with the paint.  Accidents can often be suggestive – they prod the imagination and provide a sense of discovery.  Every mark is truly an adventure.”

Also on view are three large-scale map paintings of London in which the artist manipulates space and point of view to provide a highly entertaining excursion through the streets of his native city. Presented from multiple viewpoints but lodged in a fairly accurate street plan, buildings, monuments, bridges and buses come alive in an unexpected and inventive fashion.

Educated at the Royal College of Art in London, Parks has made paintings over the last thirty years that have focused on themes of English life seen through expatriate eyes. The artist has lived for decades in New York and teaches at the School of Visual Arts.  Throughout that time the artist’s work has evolved expressively and stylistically. His early and intense realist work was closely associated with the realist revival but carried with it from the start a lyrical and intensely personal quality.  John Russell, writing in the New York Times, dubbed him “A true poet in paint and something of a find.”   In the mid eighties and nineties Parks adopted a larger scale approach to paint images of public monuments in a series of paintings that explored the unease of national identity and its attendant rituals.  These works included a highly irreverent series of English soldiers, often shown dancing or otherwise cavorting.

Parks has been represented by several major New York galleries including Allan Stone Gallery and Coe Kerr Gallery.  His work is included in a number of museum collections including the Victoria and Albert Museum, in London and the Museum of the Rhode Island School of Design. This exhibition marks his debut with 532 Gallery Thomas Jaeckel.

For more images and information : http://johnaparks.com/parks.html

John A. Parks, born 1952 in Leeds, England, is a painter who has shown widely in the US and England over the last thirty years. His work is represented in the collection of the Victoria and Albert Museum in London, the Royal College of Art Collection, the Museum of the Rhode Island School of Design and many private collections.  He received his M.A.(R.C.A.) in Painting from Royal College of Art, London, England (1973-76), and his B.A. in Fine Art from Hull College of Art, Hull, England (1970 – 73).

Beginning with his meticulous but lyrical realist paintings in the late seventies Parks has concentrated on themes of English life and the broader issue of the relationship between personal and national identity. A long series of delicately romantic paintings in the eighties explored the English obsession with the transformational properties of gardening and landscaping.  In the late eighties and nineties Parks shifted his attention to British public imagery where he applied a whimsical, playful and sometimes alarming painterly attack to undermine and decode some of the nation’s most preciously held icons.  ln recent years Parks has been using a finger painting technique – literally painting with his fingers – to explore the imagery that occupied his imagination as a child.  Paintings of trains, hunting scenes and monuments have recently been superseded my images of schoolyards and the pursuits of boyhood – cycling, exploring, fighting and camaraderie. “The recent work is all executed from memory,” says Parks. “And in using finger painting I’m using a childish method to explore childish things. For all that, these are far from childish paintings.  I’m amazed at the rich surfaces and evocative properties of the pictures I’m able to make this way. They are starting to feel like the very stuff of memory.  I’ve never been more excited about what I’m doing.” Parks is currently working on a series of Putti paintings.  “Ever since the Romans dreamed them up putti have accompanied many kinds of imagery.  Rediscovered by Renaissance painters, they appear in countless works throughout the centuries, cheerfully mirroring and often exaggerating grownup behavior. Having worked on narrative paintings for the last few years, I’ve recently been using putti because they give me the opportunity to explore human gestures and interactions in a way that is playful, sometimes bizarre and strangely universal.   Using them often feels absurd or wayward but the possibilities for invention, humor and insight into human behavior seem compelling.  Putti are also mysterious beings; in the end none of the painters who used them knew who or what they are.  Neither do I.”