Tatjana Busch, “Fusion“ a synthesis of objects with light, sound, color and motion.

“It could be like this and it could also be like that…,” says Tatjana Busch. But not until we see her latest works in this exhibition, does her meaning become truly accessible. Conceptually, her earliest works appear even more tightly regulated by the obvious influences of the strict, geometric, coloured forms we know from the Bauhaus and Russian Suprematists. Their intuitive shapes continue to spring from Busch’s innermost world, just as they did years ago. Permeating her entire body, they are finally given material form in the outside world by her hands, seeming more carefully planned than they actually are. Her latest works, however, appear to break with any dependence whatsoever on art history. They free themselves even from the shackles of physics and burst forth into freedom and openness – a freedom and openness to which the observer must surrender himself if he is to appre- ciate the true dimensions of these works.

The light installation “Fusion” invites us to broaden our consciousness. It abducts us into a fully-fledged show that immerses the observer into a real-time synthesis of light, form, colour, sound and movement – a synthesis in which the observer loses himself, dissolving, then ultimately uniting with the artwork itself to create a common, new cos- mos.

Initially this bent, folded, silver-shining sculpture named “Fusion” consists merely of outer forms. But it also harbours an inner, hidden form, one that might be referred to as its “inner potential”. This reaches far beyond the visible. It is the energy, the attraction of this artwork, whose extended reach commands the space around it and seeks even to stretch beyond it. The extent of this becomes apparent through the movement of the rays of light that meet its sur- face and create dynamic light-paintings, light-clouds and light-worlds. As they do so, these rays consistently extend, modify and distort the sculpture’s external form. What had initially seemed so static and immutable is sounding out new frontiers all the time, revealing forms that flow and stream. The outer space suddenly consumes the observer, engulfing him to make him part of the artwork itself. The void is no longer a void. Everything hangs together, merges.

Although essentially two-dimensional, the “Goldbubble” and “Hushbubble” videos trick the observer into seeing three-dimensional, dancing, reflecting water worlds. Penetrated by magical clouds of energy, these are immersed in the meditative sound-worlds of composer and former Passport bass guitarist Wolfgang Schmid – worlds inhabited by light orbits and other light creati- ons before they sink into the depths of a planetary universe, worlds which at the same time echo the holistic notion to represent the depths of one’s own inner world.

And finally there are the Snapshots. Created from such kaleidoscopic movements, these still-life photographs of “Fu- sion”, “Goldbubble” and “Hushbubble” would have the observer believe that the ‘Now’ can be captured, that the eternal flow of time and spread of space can be halted.

But can they really? Could this be the way things are? Or could they equally well be different?

Our hopes for a conclusive answer to these questions will be in vain. With their claim to absolute freedom, these works categorically exclude any such possibility. After all, it is freedom that tells us things could be the way they are, but that they could equally well be different. The observer is left completely to his own devices.
Text: Kat Schütz, Sarasota
Translation: Melanie Gridlestone, Munich 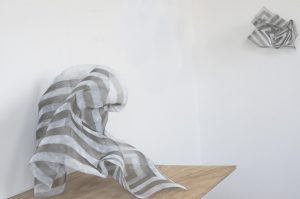 “Once upon a time there was square, a circle, a triangle and a rectangle and the passion for color and form”.

Tatjana Busch’s words remind us of the Bauhaus. Indeed, the artist has close connections to the German Bauhaus way of thinking as well as to Russian Suprematism and the Dutch De Stijl movement, or neoplasticism. Most of all, her works echo Josef Albers’ famous squares and his studies of the interplay between colors, and they also recall Malevich’s Black Square. But what does Tatjana Busch actually do with these icons of classic modern art? She crumples them, turning their clear, precise, geometric forms into something mobile, playful and baroque. Had these works been created in the 1980s, they might have been categorized as “anything goes” post-modernism. She would have been said to be rebelling against the rational forms of dogmatic, rigid modernism by quoting history and approaching it with irony, appropriating and treating it subjectively. And yet, in the case of Tatjana Busch, none of this is true. Tatjana does not feel the need to liberate herself from anything by giving her art a theoretical underpinning. Instead, she says: “It could be like this and it could also be like that…”. There is no contradiction – and no contradiction with ironic intent – between the geometric and the distorted, the minimalist and the baroque, or the solid and the light. In Tatjana’s work the coincidental is one important factor; the search for shapes and colors is an intuitive process.